Larocque Bey, Olatunji and the birth of the Zulu Kings?

I recently came across a short video on YouTube on the history of the Zulu Kings, featuring Alien Ness. It was put out by Reel Sung Productions, a company led by Tony "Mr. Wave" Wesley, of the New York City Breakers.  In it, the narrator says," the Zulu Kings were formed with the sole intent of entering the TIP dance contest and talent show.  TIP stood for "Tremont Improvement Program."  Two fuzzy images flash by on the screen.  The first turns out to be the program for a Sickle Cell benefit event hosted by Afrika Bambattaa at the Bronx River Neighborhood Center, while the second appears to be a more traditional party flyer, which I've been unable to identify.  The implication is that there is some connection between this Sickle Cell benefit and the formation of the Zulu Kings.  Mr. Wave hasn't responded to my inquiry.  Cholly Rock, the "11th Zulu King," did confirm that the talent contest story is true.

I started digging to find out more, and was surprised at how cloudy the history seems to be.  Cindy Campbell's August 11th, 1973, back to school party is well documented and endlessly discussed.  In contrast, there seems to be no clear answer as to when the TIP contest took place, or where.  November 12, 1976 is sometimes cited as a significant date in the formation of the Zulu Masters, later called the Zulu Kings.  If the TIP contest took place then, though, I haven't yet found documentation of it.

That's not to say that I found nothing.  The Lambert Houses project, near the Bronx Zoo, was owned by developer Phipps Houses and was completed in 1973.  The New York Times reported that "In an effort to eliminate gang problems that afflicted East Tremont for many years, [Phipps Houses] created the Tremont Improvement Program, a recreation, education and counseling program with afterschool and evening activities for youths and adults."  TIP's director of recreation was Arthur Crier, legendary Motown doo-wop star, and he did indeed hold talent contests.

It seems unlikely, or at least unproven, that the Sickle Cell benefit was also a TIP talent contest.  That said, the program is fascinating.  Bambattaa scolds big acts for not showing up.  Did he really expect Sly and the Family Stone to appear?  What most intrigues me, though, is who did perform.  A poet, a gospel group, a soul band, and three dance troupes!  I can't find anything on "Ike and the Dancers and Drummers of Today."  The Larocque Bey African School of Dance, and the Olatunji Dance Troupe, however, I'm familiar with.  Check out the following clips of Larocque Bey- the photos are undated, the newspaper clippings are all from 1973-1978. 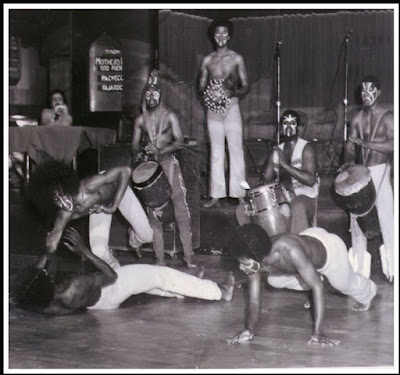 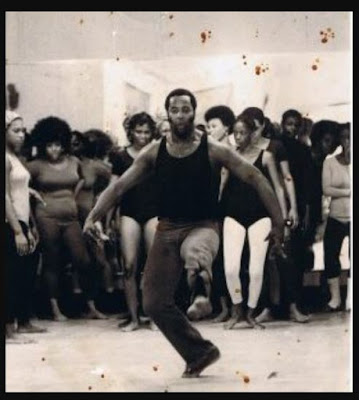 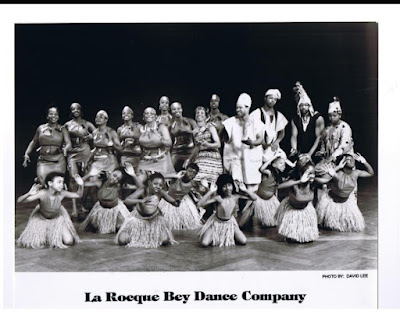 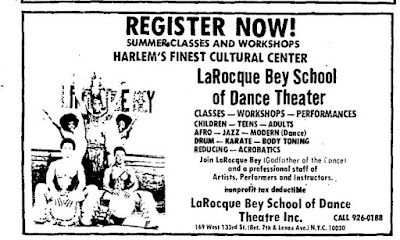 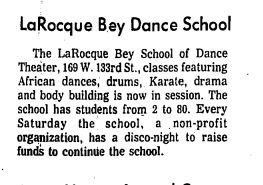 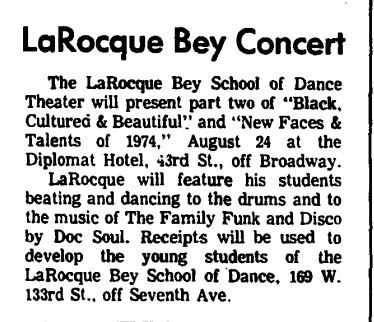 Michael Babatunde Olatunji is even a bigger name.  He spent decades promoting African drumming and dance in America, from his Olantunji Center for African Culture on East 125th Street.  Chuck Davis, the subject of two posts on this blog, danced in his troupe. 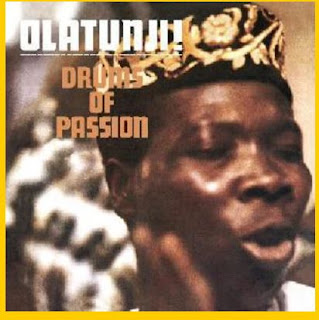 So, we know that attendees of Afrika Bambaataa's Sickle Cell Benefit would have seen a great deal of African dance.  Whether this particular event marked the birth of the Zulu Masters/Kings or not, it demonstrates the pervasiveness of African dance in the Bronx and Harlem in the mid-1970s.  And in fact, one of the legendary original bboys at Kool Herc parties, Trixie (Lauree Myers), had a close connection.  His late mother, Geraldine, usually called "Ma Myers," according to one source, danced in the troupes of both Larocque Bey and Olatunji.  Dancin' Doug Colon says that Ma Myers taught African dancing and drumming to Trixie, his brother bboy Rossy, and sister bgirl Kimmy Kim.  There is a YouTube video showing Trixie playing African drums.  In his interview with Sir Norin Rad, Trixie says " All my friends could tell you I already knew how to dance so it wasn't like I didn't know how to dance. Nobody did..I put it to you like this. My Mother was a dancer so I gotta say my mother kind of inspired me to dance."