Yusef Abdul Salaam (aka Joseph Jones) was another very early promoter of Capoeira in New York City. A member of the Nation of Islam, he lived in Harlem and wrote for “Black News,” a publication of The East: Cultural Center for African People, located just off Fulton Street at 10 Claver Place in Brooklyn. 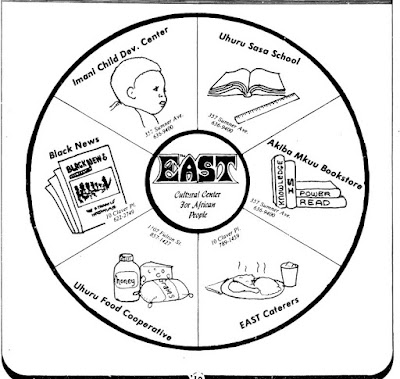 In an interview headlined “Book on Blacks and Martial Arts in 8th Printing”(New York Amsterdam News, December 25, 1982) he described how he came to write “The African/Bilalian and the Martial Arts: The Black Man’s Contribution to the Fighting Arts ” which he first published in 1977. 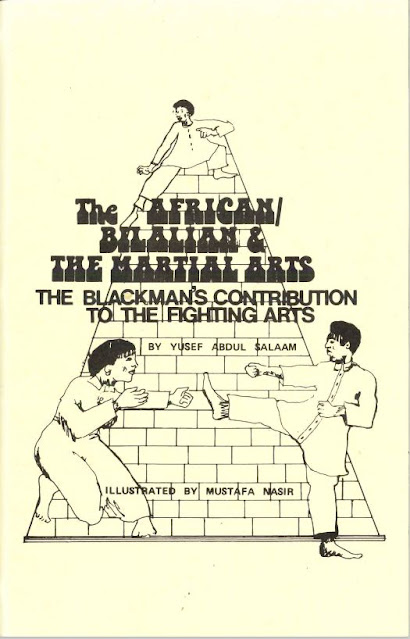 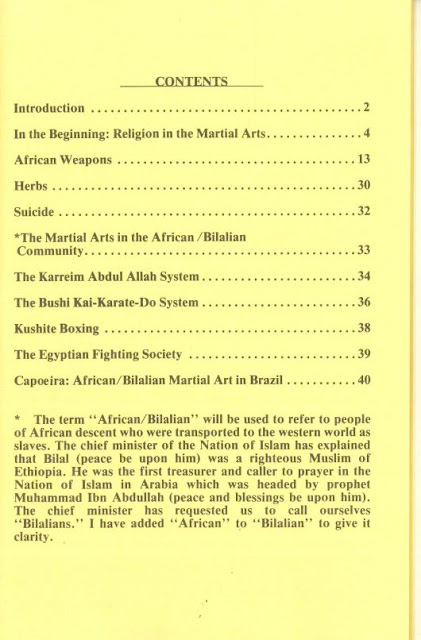 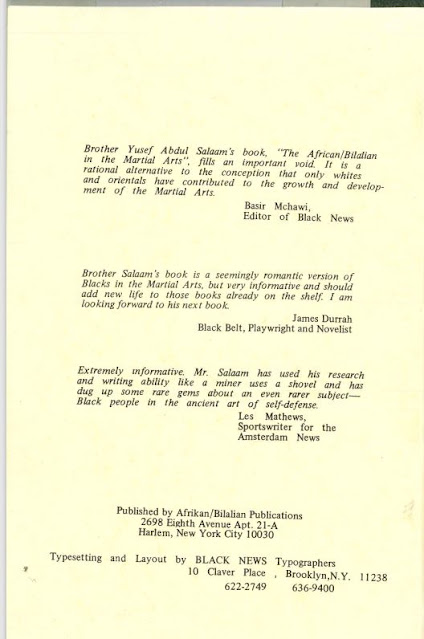 “I wrote and researched the pamphlet while I was in City College,” Salaam reveals, “It was a term paper.” He used a student loan to finance the illustrations, typesetting, layout and printing. He became a familiar sight on 125th Street peddling the book. “I sell some through mail order, too,” he says. “And Liberation Bookstore here in Harlem, New Day Bookstore out in California and Sunrise Cardshop here in Harlem have sold the book continuously…. My favorite chapter in the book deals with Capoeira…,Salaam says.” He is currently finishing a children’s book on Capoeira illustrated by George F. Beazer, that’s due to be published in the Summer of 1983.”

According to the front matter of “Capoeira: African Brazilian Karate”, “Portions of this book appeared in Ebony Jr. November 1978. And in Scoop, a defunct children’s magazine that appeared monthly in the New York Amsterdam News.” 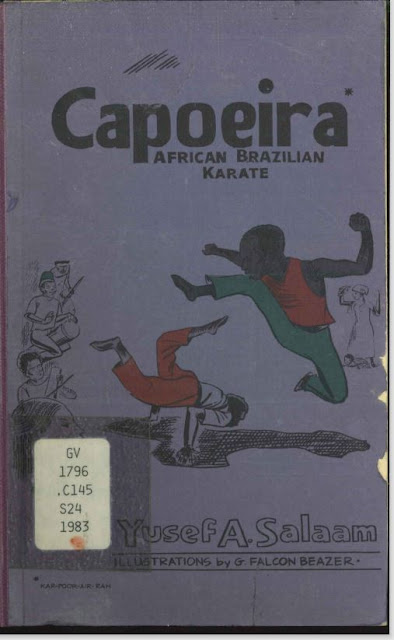 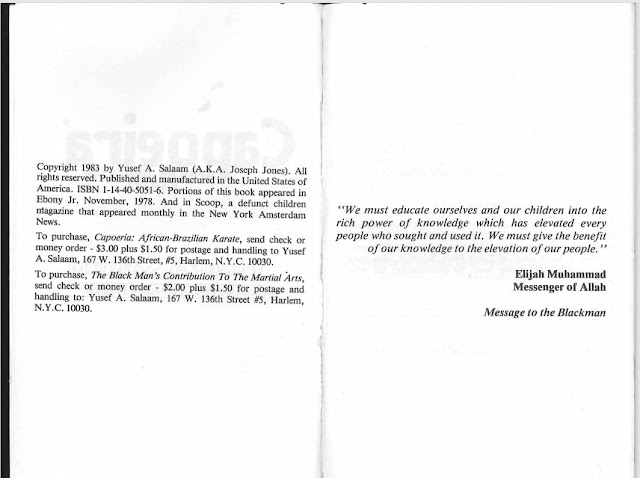 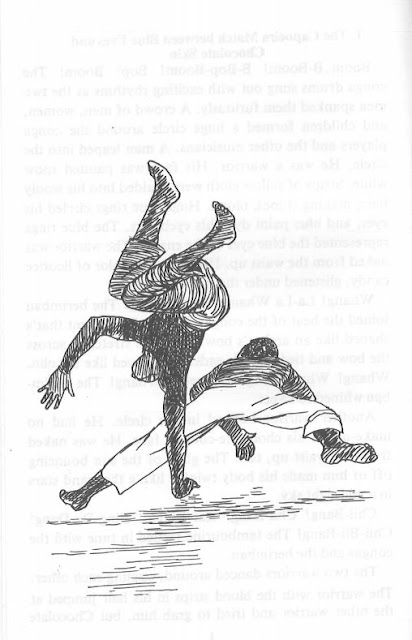 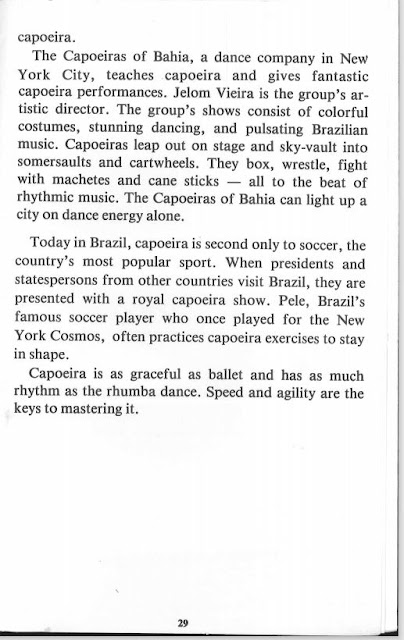 While Salaam’s first book discusses Capoeira in general terms, this second one specifically mentions Jelon Vieira, in glowing terms, in a short non-fiction coda to a story mostly devoted to a miniature epic set in Africa and Brazil. When meeting Vieira, however, Salaam had much more conflicted feelings. In the May 1979 issue of “Black News,” Salaam reviews the show put on by Jelon Vieira’s “Capoeiras of Bahia” at the Klitgord Auditorium in Brooklyn. This would have been the third annual show organized by schoolteacher/martial artist Robert Cooper. Though he is impressed by the physical display, Salaam has a problem with lack of Black performers in the show. He writes:

“The next presentation was ‘Capoeira,’ the star act of the show. I was both pleased and disgusted by this presentation. Jelom Vieira, the director of the show, is a smooth capoeira dancer. His whirling crescent kicks and sweeps are fabulous. The mule kicks, executed while walking on the hands, the booming double somersaults, were fantastic.

However, the two times that I’ve seen this show Vieira has used so-called mulattos and whites on the Capoeira presentation. I have yet to see him use dark-skinned people. This is acidly ironic being that capoeira is an African martial art dance.

Vieira seems to dress his show with all the African trappings- the congas, ethnic dancing, rainbow colors, but when it comes to the essence of the whole show capoeira, he employs those who would be considered white in Brazil. He explained to me that “Whites and mulattos were better capoeira dancers than their darker-skinned counterparts.” He added that it was his show and he can put in it who he wants. “Maybe,” he explained sarcastically, “I will paint myself Black next time.”

This account seems unfair to Vieira. Of course, Brazil has complicated racial politics, and Vieira may have as much unconscious bias as anyone. His personal history, however, is one of many deep, personal connections to Black dancers and artists. Vieira grew up without a father. He recounts how his mother tried to prevent him from practicing capoeira, since it was “too black.” Ignoring her, he began serious capoeira studies as a child with Mestre Bobo, later moving to the school of Mestre Eziquiel. He describes them as beloved father figures. Both were dark-skinned Black men, students of the founders of modern capoeira, Mestre Pastinha and Mestre Bimba, both also dark-skinned Black men. When Vieira came to the United States, his earliest supporters were mostly Black-Robert Cooper, Ellen Stewart (founder of La MaMa Experimental Theater), and most of all, Alvin Ailey, his mentor and artistic inspiration. Vieira later helped Mestre Joao Grande (a dark-skinned Black man) set up his school in New York, treating him as a revered elder of the art.