Continuing on the theme of dance in Bronx public schools in the mid-1970s, I want to highlight a program that took place over the entire 1976-77 school year at Theodore Roosevelt High School on Fordham Road.  A reminder that this is not an idle tangent.  As we saw in my last post, Spy, "the man of a thousand moves," explicitly said that he and his friends invented what we recognize as breaking "in school, in seventh grade."  Focusing on the school experience of teenagers at this time, in this neighborhood of the Bronx, led me to an intriguing discovery.

In 1976, two educators associated with Bronx Community College, Robert Lear and John Bragin, received a $42,000 grant from the United States Office of Education for a program called "Ethnic Theater: Springboard for a Multicultural Curriculum," to be conducted at Theodore Roosevelt High School over the course of that school year.  The program had drama and social studies components, but the most active and successful component was "Ethnic Dance," led by the Chuck Davis Dance Company.

The program received some early publicity in the Daily News, which reported that a school performance for 350 students by the Chuck Davis Dance Company led to the quick recruitment of 40 student volunteers for the program, out an eventual 120.  For perspective, the high school's enrollment was around 3000, so the program was of significant size, but not school-wide. 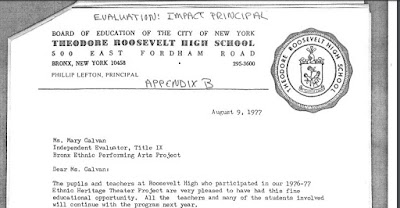 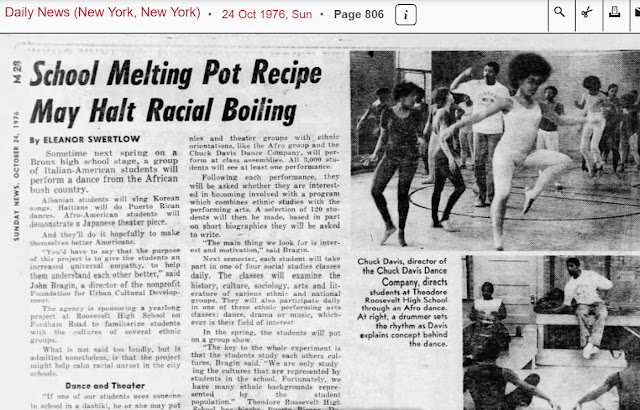 At the end of the school year, the program leaders submitted a long, detailed final grant report, which included a letter to the independent grant evaluator from Principal Phillip Lefton.  I'll quote at length from these, to give a sense of the program, recognizing that bureaucratic grant-speak is always going to be unfailingly upbeat.  Take the constant sunshine with a grain of salt.

"Dear Ms. Galvan: The pupils and teachers at Roosevelt High who participated in our 1976-77 Ethnic Heritage Theater Project are very pleased to have had this fine educational opportunity.  All the teachers and many of the students involved will continue with the program next year....

The Chuck Davis Dance Company, under Ms.[Bess] Pruitt's professional management, has had such valuable prior experience teaching young people in a workshop setting.  As a result, they were the most successful group in residence.  During the fall term, they, as did the others, held performances for 350 to 400 pupils and gave lecture-demonstrations for single classes.  In the spring, they concentrated on class workshops over a period of several weeks.  We are especially grateful to the Chuck Davis Dance Company and Jose Coronado and Dancers for their very generous after-school sessions with Roosevelt pupils in which the pupils were trained for lecture-demonstrations for other classes, and prepared for the video-taping sessions at the Colonnades Theater Lab [editorial note- I've tried to find the dance tape that was made, with no luck so far].

Other dance companies in residence included Chiang Ching, the Pauline Koner Dance Company, and the Rod Rogers Studio.  The theater company in residence was the Colonnades Theater Lab.  There were also fall programs by the Puerto Rican Traveling Theater and the Italian-American Repertory Ensemble.....

The dance class has become a group unto itself, working this summer with the Chuck Davis Dance Company and scheduled to perform under aegis of the company next year in a variety of community settings- as well as in the Ethnic Heritage Program recently funded to the Yonkers School System through U.S.O.E's Title IX grant to the Council for the Arts in Westchester."

Later in the report:

"Students in the ethnic dance workshop, probably the most successful component of the program in terms of long-term impact on both students and school, were taught to track ethnic choreography back to its roots in the everyday gestural vocabulary of "silent language" of representative cultures-- be it social, functional, or ritualistic gesture.  The potential strength of this approach for ethnic studies students of limited English-speaking ability, for whom dance is both a universal language and a culture-specific set of gestures, is currently being tested in the second year of the program which is specially targeted to a mixed class of 20 bilingual and 20 mainstream students at the IMPACT SCHOOL....

As anticipated, the integration of professional artists-in-residence, indeed the leading ethnic dance companies and the most serious cross-cultural resident theater in New York, provided the project with an unusually high quality of professional resource support drawn from the community, at large....

The example of an Egyptian student moving through West African harvest dances, a Jamaican student performing a Chinese courtship dance, or an inter-ethnic ensemble performing a student play based on Holocaust refugees written by a Puerto Rican classmate proved strong catylists [sic] to achieving the affective objectives of the project."

So, what are the chances that members of the Chuck Davis Dance Company may have introduced students to capoeira moves?  Quite good, I would say.

One of Chuck Davis' core company members was Abdel Salaam (formerly known as Milton Bowser), who went on to direct Dance Africa in Brooklyn after Davis' retirement.

In a previous post, I quoted Salaam from Bronx Dance Magazine, describing what kind of dance he was teaching children in 1977.  Note that he is married to Dyane Harvey-Salaam, who danced in capoeira performances with Jelon Vieira in the 70s.  Salaam had also had been a principal dancer in the Rod Rogers company.  Rogers was part of the Roosevelt High program and taught alongside Vieira and Machado at the Clark Center for the Performing Arts. In the mid-70s, Salaam was living on Marcy Place in the Bronx, near Jerome Avenue.

The bold-faced emphasis in the following quote is mine.

"The first big piece I ever did was for Bill Aguado who was the head of the Monroe Houses Community Center. Bill asked me to do this project...called Masks and Movement...That was probably in 1977. It was a whole bunch of kids who had never danced before. They were having fun and I was this athletic guy the boys could relate to. I had these boys flipping and flying all over the place..."- Abdel Salaam