"Saturated with African dance": Chuck Davis in the Bronx

In my last post, I discussed a number of sites where capoeira was practiced or performed in the mid-to-late 1970s in New York, identifying multiple spots in Manhattan, and at least one in Brooklyn.  For this entry, I'll try to bring it a little closer to home, so to speak.  Author Curtis Marlow,  in his 1984 book Breakdancing, said that the South Bronx in the mid-seventies was "saturated...with African dance."  In this post, I'll examine that notion, document it, and see whether a connection can be drawn to capoeira and early breaking crews.

It seems that in the late 1960s, close to '68, many professional West African dancers came to America and settled in the Bronx, especially the South Bronx.  Chuck Davis, who now has two companies- one in NY, and another in Durham, North Carolina, started in the Bronx.  Davis is credited with starting the Brooklyn Academy of Music's Dance Africa Series.  Many of these dancers, who had settled in the Bronx danced with such companies as the Senegalese Ballet in Africa, Dancers like Irabim Camara and Drummers like Ladji Camara, who are legendary, were in the public schools as teachers-in-residence.  They offered master dance classes to the professional American Dance Companies like the Chuck Davis Dance Company and the International African Ballet....The knowledge that these dance companies gained was used in performances at public schools, dance mobiles, museums, community centers, etc.- Curtis Marlow, Breakdancing (Sharon Publications, 1984).


Once again, the Internet Archive provides some wonderful film footage.  Made in the Bronx: A Workshop in Creativity is a half hour documentary produced and directed in 1981 [Worldcat says "made in 1979"] by Susan Fanshel.  The film documents Bronx community center leaders dancing, making masks, writing poetry and doing arts and crafts.  It's a wonderful portrait of some lovely, gentle residents at a time and place that was often neither lovely nor gentle.  I want to highlight the two short dance segments- click on the below screenshots to view.

In the first, we see Chuck Davis and drummer Ron Love leading a dance workshop.  The movements in this case are very different from breaking or capoeira, though there is some resemblance to Maculele, a Brazilian dance often done alongside capoeira.  The clip does give a nice sense, though, of "Baba" Chuck Davis' charisma and energy.  According to the film's credits, the participating community centers in the workshop as a whole were "Roberto Clemente State Park; Edenwald/Gunhill; G.L.E.E.; James Monroe; Kingsbridge Heights; Jackson Project: Marble Hill; Melrose; Treemont [sic] Improvement Program; 48th Police Precinct."


The second clip is of children from the James Monroe Center, with mask-making and dance led by Elaine Rosner, Abdel Salaam and Phillip Williamson.  As I hear it, the kids' chant seems to be "Butterfly Go!"  Abdel Salaam is now the artistic director of DanceAfrica.  He is married to dancer/choreographer Dyane Harvey-Salaam, who performed with Jelon Viera in the 1970s.  In a 2010 interview, Abdel Salaam related the origin of this program, or a closely related one.

"The first big piece I ever did was for Bill Aguado who was the head of the Monroe Houses Community Center. Bill asked me to do this project...called Masks and Movement...That was probably in 1977. It was a whole bunch of kids who had never danced before. They were having fun and I was this athletic guy the boys could relate to. I had these boys flipping and flying all over the place...".- Abdel Salaam, in Bronx/Dance Magazine, September 2010.


The Chuck Davis Dance Company's mailing address was 819 East 168th Street in the Bronx, which is a little bit south of Crotona Park.  He and his dancers did indeed teach and perform all over the city.  The "Dance Touring Program" put out by the National Endowment for the Arts gives some detailed information.

Notice that the Chuck Davis Dance Company was in residence at the Roberto Clemente State Park and the Bronx Community College Center for Continuing Education and Community Services.  They conducted classes in "a public high school in the Bronx."  And they were designated the company in residence for the New York City Board of Education in the Spring semester of 1976, "reach[ing] more than fifteen thousand school children."

And what were they offering in these classes?  Well, one option for an activity was a master class in "Ethnic [dance]- consists of African, Afro-Brazilian and Haitian techniques."

Outside of school settings, The New York Times reported that they performed in Crotona Park in 1975, to give just one example.

And finally, zeroing in, I'd like to spend the remainder of this post focusing on the Chuck Davis Company at Bronx Community College.

There are two reasons for this focus.  First is a case of "looking for your keys under the lamp post since that's where the light is."  That is, the Bronx Community College Archives has done a fantastic job of making all its old course catalogs, yearbooks, and student newspapers easily accessible and searchable online.  It's my good fortune that BCC happened to be an important location for the Chuck Davis Company.

The second reason is geographical.  There seems to be widespread agreement among old-school breakers that a few crews were instrumental in transforming the art sometime around 1975.  Maybe the most crucial among them was the Crazy Commanders Crew, founded by Shorty Rock and Spy.  They are usually said to be a "Burnside Avenue" crew, but to be even more specific, Shorty Rock has said that the "hood" he and Spy grew up in was "Harrison Avenue between 180th and 181st."  If I'm reading the map correctly, this is the 2100 block of Harrison Ave., and is only two or three blocks away from Bronx Community College.  They were in the same year of school and Spy was born in 1963, so presumably Shorty Rock was too.

Much of the Bronx may have been a wasteland at this time, but BCC, though struggling with budget cuts and other challenges, was a fully functioning institution catering to working class black and Latino students.  In 1974, when our evidence begins, they had open admission and free tuition.  And as we'll see, they had multiple ties to the immediate neighborhood. 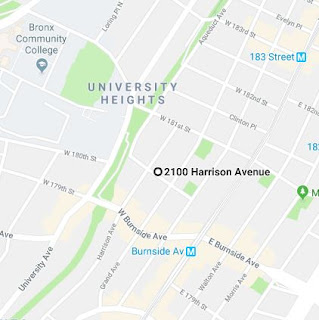 In the fall of 1974, The Communicator, BCC's student newspaper, reported that a day camp run on their campus that summer just ending had served almost 600 "neighborhood youngsters."  The day camp was grant-supported and free for participants, and included a daily free lunch.  Activities included "softball, gymnastics, swimming, track, volleyball, basketball, modern dance, tennis, dodgeball and kickball." 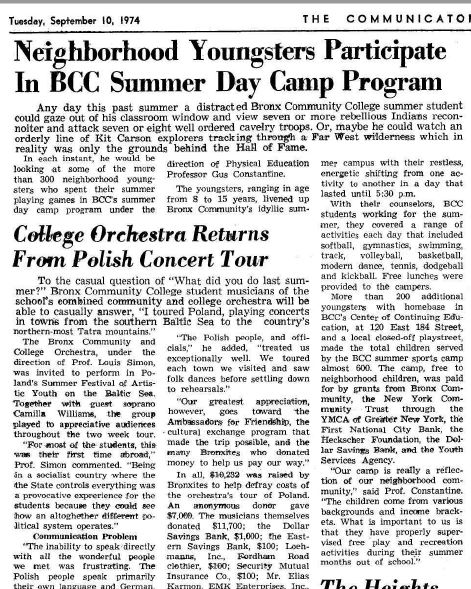 In the same issue of the newspaper, in fact, even on the same page, was an article about a performance that day by the Chuck Davis Dance Company on the central mall.  The article announces "Classes in Beginning Dance (Afro and Modern Techniques) are currently being held on Monday evenings from 6:00-7:30.  On Tuesday evenings from 6:00-7:30 the company is offering instruction in Dancer-nastics (exercises)....A fee of $1.50 is charged for each session."


The yearbook the following spring features a photo that may very well have been from that September performance. 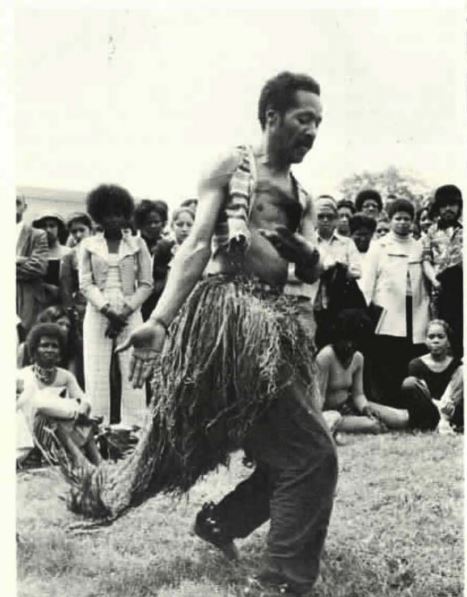 In October, there was another announcement of community classes in "Dancer-nastics and Ethnic and Modern Dance."

As I mentioned, the student body was majority minority, mostly black and Latino, and probably due to the large nursing program, had a high proportion of women enrolled.  In the 1976 yearbook, a certain Vinnie Barbarino snuck in.

Lest you think that a community college setting might have been hopelessly square to poor kids from the "ghetto," check out the style of these students in the 1977 yearbook.
Finally, evidence from 1979 that the Chuck Davis Dance Company's association with BCC was not short-lived, they had been given office space in Gould Hall. 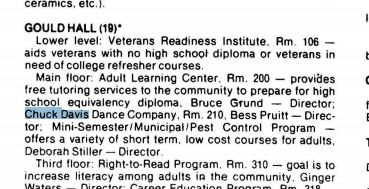 So, as in my previous post on capoeira, the case is far from proven.  Yes, African and Afro-Brazilian Dance was firmly established in the Bronx no later than 1974.  And in fact, it was established in a location only about 500 yards from the buildings in which Shorty Rock and Spy, the man of a thousand moves, were inventing what we now think of as breaking.

The timing is right, too.  In the opening minute of the documentary "The Freshest Kids," Spy says to the camera "I can't really say I invented it, cuz it was a couple of us who invented it.  In school. In seventh grade."  Whatever he is claiming to have invented with his friends, it would have been around 1975.

Whatever the case, the topic seems worthy of further investigation.  I'd love to hear from anyone who lived in the Bronx in those years, especially around the University Heights neighborhood.  I'll add more to this post as needed.

An interesting addition that shows that Chuck Davis had significant exposure to Latin dance styles and dancers as well as African.  On May 18th, 1974, the Ballet Hispanico performed with the Chuck Davis Dance Company in a program announced in this dance annual by Bronx Community College. On the same page of the annual can be found this elegant picture of Chuck Davis himself dancing.